What’s a post about robotics camp doing on a paper crafting site? Grandkids’ creations! No crafting this past week for me since our grandkids came to spend the week while they attended robotics camp at Rice University. And each evening after dinner we made them put away their iPhones and play card games…argh…LOL, they called it torture! But I secretly think they enjoyed it, especially if they beat grandma!

They spent the week creating and programming remote controlled “cars.” And Friday afternoon they got to show off their efforts to parents and grandparents. Our granddaughter was the only girl in a class of 12, and she did better than some of the boys, including her older brother! She added an arm with a magic marker to her car and programmed it to draw on paper.  Here’s several pictures of their cars with the proud grandparents. The video of our granddaughter’s drawing car wouldn’t post, but it was really cool – that is until it ran off the paper and drew all over the cafeteria’s floor tiles. At least it was a water-soluble marker so it came off the floor pretty easily – whew!

Notice the attached “arm” with the marker on our granddaughter’s car.

Our grandson mounted his wheels a little forward on his motherboard so it does wheelies, a boy thing, I guess.

Oops, as she was showing us what her car could do, the battery wire broke. So she had to rewire it and did it successfully in time to compete in the remote controlled car soccer game and races! 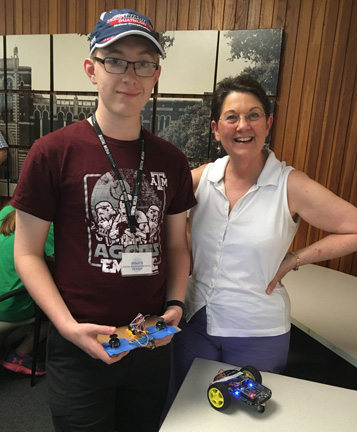 Pretty cool what their cars could do! I wish this technology had been around when I was growing up! I loved making things and this would have been a lot of fun to do!

Thanks for sharing my blog!

This entry was posted in Uncategorized and tagged Grandkids. Bookmark the permalink.

This site uses Akismet to reduce spam. Learn how your comment data is processed.

When I am not a Scientist, I am a runner, a baker, a reader, a writer, a mother, a Christian, a liberal, a wife, a church goer, and a work in progress

Apps for any screen

amyoneillblog.wordpress.com/
Stampin' on the Fly
I Teach Stamping